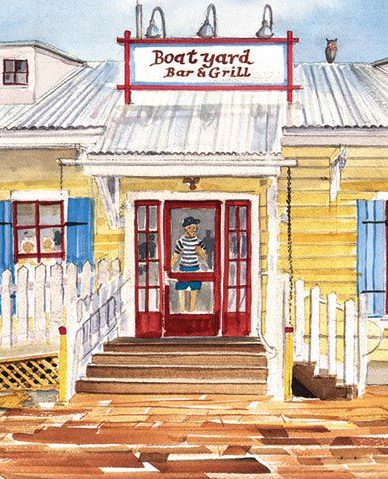 The Boatyard was founded in 2001 by Owner Dick Franyo after he left his 30 year investment career with Alex. Brown & Sons, BT Alex Brown, and Deutsche Bank where he was head of Investment Banking.

As a child, Dick grew up on the Chesapeake Bay - sailing and fishing his whole life, he developed a deep appreciation of the environmental challenges of this natural treasure. He also loved bars and cafes and visited them in his travels from Maine to Key West and the Islands.

His vision for the Boatyard was to celebrate the Chesapeake Bay lifestyle and other places that Chesapeake Bay sailors and fishermen frequent such as Key West.  Pictures of local sailors line its walls and fish caught by local fishing friends are hung in the Boatyard’s Pilar Bar, named after Hemmingway’s fishing boat.  The idea was for Kiwi sailing pros to be sitting at the bar next to a yacht owner and a diesel engine mechanic –discussing the regatta last weekend or big rockfish that got away on their last outing.  Our photo boat films the sailing races and they're always on in the main bar!

Located on Restaurant Row in the historic maritime district of Eastport, the Boatyard is just a short walk or water taxi ride from Annapolis City Docks.  The interior is like that of an old yacht, with shiny white walls, mahogany, sea foam green ceilings and large wooden beams. It will take many visits to appreciate all of the many paintings and items collected during the owners' travels.  The old wooden fishing skiff that was bought off a beach in Saint Barths, an original wooden sign from Hogs Breath Bar in Key West, and a surfboard autographed to the Boatyard by singer/songwriter Jack Johnson are just a few examples.

The Boatyard is where local sailors, fishermen and lovers of the Chesapeake enjoy pint drinks, great crab cakes and the freshest local seafood. Specialties include smoked fish of the day (on premise), cream of crab and Maryland crab soups and an extensive list of crab and seafood specialties. The Boatyard has the most extensive raw bar in the area including a variety of oysters, clams, shrimp and mussels.  Its weekend brunch is tops.

The Boatyard receives awards for being most family friendly and having the best crab cakes and burger on the Bay.....  The First Lady came from the White House to enjoy our crab cakes.  Singer-songwriter Jimmy Buffett and Actor Kevin Bacon have also enjoyed them!

Baltimore Magazine named our crab cakes on its list of Best in the Region and was the only Annapolis restaurant on the list.  The article states that “the Eastport neighborhood gathering spot feels like a congenial yacht club in a preppy New England village.  Two broiled cakes, crisp around the edges…are low on filler and seasoned with an old bay bite…washed down with a local draft…there’s nothing better after an afternoon on the water”.  Due to customer demand the Boatyard now ships its world famous crab cakes nationwide - order online.

The Boatyard was named by Coastal Living, Sailing World, Sail Magazine and voted by Wight Vodka/Scuttlebutt Europe, among others, as one of world's top sailing/boating restaurants and bars.  Washingtonian Magazine calls us "...the nautical Cheers"!

The Boatyard, its owner and staff are committed to a healthier Bay, sailing fast, fishing with friends and happy kids.  It is a member of One Percent For The Planet, a group of businesses who donate greater than one percent of their annual sales to the natural environment.  This Club was started by Yvon Chouinard, owner of the Patagonia Corporation, and Craig Matthews, owner of Blue Ribbon Fly Shop in West Yellowstone, Montana, and friend of Dick’s. The Boatyard received the Annapolis Environmental Stewardship Certification from the City of Annapolis.  It recycles just about everything including its food scraps that go to composting... even the oyster shells are collected by the Oyster Recovery Program.

The Boatyard founded and importantly sponsors, four outdoor lifestyle charity events annually:  the Boatyard Opening Day Rockfish Catch & Release Tournament benefitting the Chesapeake Bay Foundation, Coastal Conservation Association MD, and the Annapolis Police Department Youth Fishing Camp; Bands in the Sand for and at the Chesapeake Bay Foundation; The Boatyard Regatta to benefit C.R.A.B. (Chesapeake Region Accessible Boating) which gets those with disabilities on sailboats; and The Boatyard Beach Bash for and at the Annapolis Maritime Museum.  These events have raised upwards of $5 million over the years.