Watch them here or at the Boatyard's main bar where all the filmed races are shown, all day, every day! 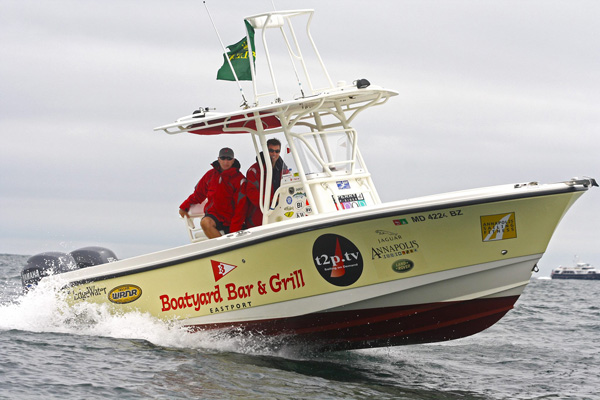 Holding to tradition, part of the Boatyard Bar & Grill original vision included filming the long-standing Annapolis Yacht Club Wednesday night races, as was done many years ago at Marmaduke's Bar once located down the street.

The Boatyard hired Tucker Thompson and Bruce Nairn at t2p.tv to capture all the racing films shown at both the restaurant and AYC.  Our main bar is a favorite meeting spot for friends and the racers fresh off the course to watch the races.....talk of how their boat would've won except for that last wind shift is just one excuse you'll hear!  t2p.tv tows the Boatyard film boat to regattas from Key West to Newport and Block Island.

By Susan Reimer, The Baltimore Sun

The weekend begins on Wednesday nights in Annapolis with the blast of a starting gun.

That's when dozens of sailboats jockeying in the Severn River harbor head to the starting line for the Annapolis Yacht Club's Wednesday night races, a summer tradition in this waterfront community since the 1960s.

What began as "beer can races" — just a casual event to break up the week — has become serious business for the sailors, as well as for City Dock bars and restaurants.

"This is real sailing," said Bobby Frey, the yacht club judge who runs the races, which are perfect for the competitive sailors who don't have the time to travel the country to regattas. One hundred and fifteen boats are registered in 15 classes. Protests over rule infractions are not rare, and they can go all the way to the top of the U.S. Sailing Association.